Mapping Trends of Violence in Peshawar: A Study of Selected Police Stations


Mapping Trends of Violence in Peshawar: A Study of Selected Police Stations

This paper presents the trends of violence in Peshawar district in Khyber Paktunkhwa province of Pakistan based on police reported cases. The data was collected from the First Information Reports (FIRs) of five (5) selected police stations of Peshawar including Gulbahar, Faqirabad, Yakkatoot, Mathra and Town police stations respectively. For this purpose, past three months FIRs were scanned for relevant data. A total of 1421 FIRs were scanned. A scanning schedule was developed with pre-coding. All the FIRs were converted to relevant Scanning Schedule forms. The data, then, was put into MS Excel Spread Sheets. The data reveals that most of the drug crimes occur in Gulbahar and Yakkatoot police station jurisdictions, a densely populated urban area. Highest frequency of murder cases was reported in Mathra police station jurisdiction, a sparsely populated rural area, while highest frequency of attempted murder was recorded in Yakkatoot police station jurisdiction, again a densely populated urban area. This study recommends online geographical visual imaging of crime data.

This paper presents the trends of violence in Peshawar based upon police reported cases. Police—law-enforcement to be more precise—is the first agency to respond in the face of crime. When a crime is committed, whether violent or non-violent, either it is reported directly to the law-enforcement or the law-enforcement itself finds out the fact. Maintaining record of all the offences is one of the essential components of every law-enforcement agency. Crime data is recorded, compiled, categorized and analyzed throughout the world. Under the Police Rules of 1934, the police in Pakistan, and Khyber Pakhtunkhwa, maintain the record in twenty six (26) registers (Police Rules, 1934, Chapter XXII, Police Station). The criminal records are kept in the following registers:

Besides these, there are at least two confidential registers as well. A brief look at the police station record maintenance reveals that it has a comprehensive record registers system. All this data goes to the District Police Officer (DPO) at district level and thereupon moves to Additional Inspector General (IG) Investigation, Khyber Pakhtunkhwa to the provincial level (Abbas, 2011). However, this bulk of data usually remains unfurnished, unrefined and unreported to public. In the US, all the crime data is published annually under the Uniform Crime Report document (Maltz, 1999). In Japan, the National Police Agency also publishes annual crime statistics (Crime in Japan, 2010). In Pakistan, it is highly difficult to analyze the raw data compiled by the police for crime trends and tendencies or any other meaningful purpose. Nonetheless, the importance of this valuable data cannot be denied as it can be used for research purposes. The present study aimed at analyzing this raw data of the police for some meaningful analysis.

This research was designed to analyze the existing trends in crime and violence in different localities of Peshawar district.

A performa was developed to collect data on crime and violence from the police stations existing registers for the past three (3) months (July, August, September 2016). The collected data was transferred to MS Excel Spread Sheets. It was analysed through SPSS.

Nature of data and sample area

The study is a mix-method research (Johnson and Onwuegbuzie, 2004). It mixes archival with ethnographic data. For this research, the archival data was collected from the First Information Reports (FIRs) of the selected police stations of Peshawar district. The detail of police stations is given in Table 1:

The ethnographic data was collected by visiting and observing these localities. It is pertinent to mention that Peshawar is the native town of the researcher of this study.

This research project was carried out with the permission of relevant authorities. Further, the following ethical codes were observed:

This research project intended to collect crime data from the First Information Reports (FIRs) of the selected police stations for past three months (August, September, and October 2016). For collecting the primary data, a form was designed (see in attachment). The first task of this research was to obtain the police First Information Reports (FIRs) from the respective police stations. It is pertinent to mention here that police is known as a rigid department in Pakistan when it comes to information sharing (Khan and Prince, 2003). It proved to be one of the most time consuming aspect of this research as well. Nonetheless, the researcher used all formal means to gain access to police data.

In order to collect FIRs from the respective police stations, a letter was sent to Secretary Home and Tribal Affairs department through the Chairman, Department of Social Work, University of Peshawar, Pakistan. The honourbale Secretary forwarded the letter to Deputy Secretary Police, who then forwarded it to Section Officer Police, who forwarded it to the Provincial Police Officer.

Each SP marked the letter to one of the DSPs who then would mark the letter to the concerned Station House Officer (SHO). It was finally the Moharrir of the respective police station who would allow us to have the respective FIRs photocopied (See Graph 1 A&B for a visual view of the procedure). In order to get the FIRs registers photocopied, the concerned Moharrir (clerk) would hand over the FIRs register to one of his subordinates who would accompany the Data Enumerator to a photocopy-shop, sometimes miles away from the police station..

Each FIR was converted to Form-D.  A total of 1431 FIRs were photocopied and then converted to the Forms. All the forms were entered into MS Excel Spread Sheet. 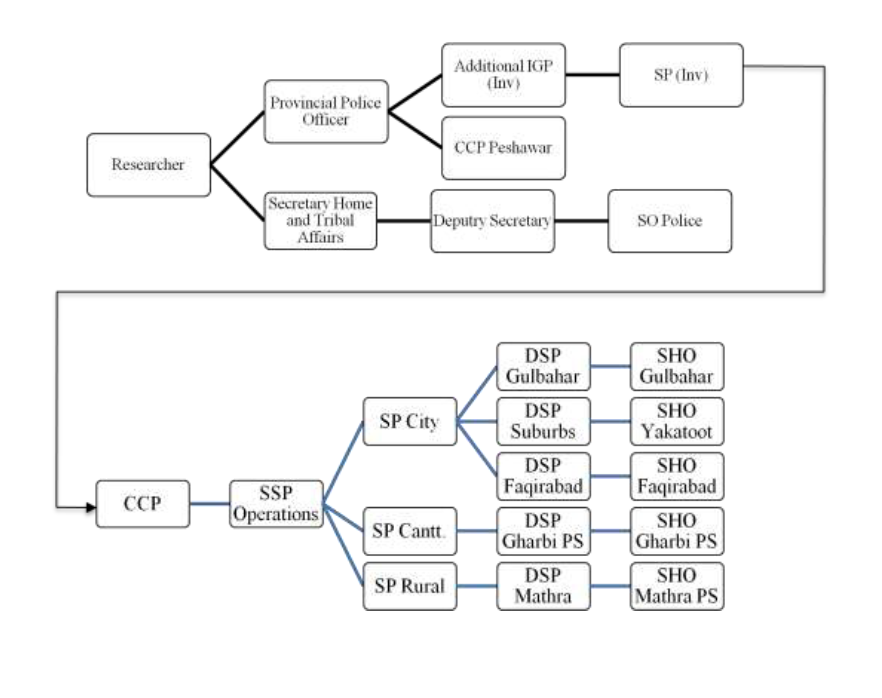 The population in Gulbahar police station jurisdiction mainly consists of Hindko speaking citizens of Peshawar with parts of Mohmands, Afghans, and Afridis. However, areas such as GT Road near Bus Terminals consists of populations from all over Pakhtunkwha with rapid transition. It is the area from where commercial busses enters and exits from and to Peshawar for all over Pakistan.

The population in Yakkatoot police station jurisdiction mainly consists of Hindko speaking people living in ancient walled city. However, some areas are covered by Mohmands and Khalils. Hazarkhwani is a purely Pakhtoon area.

Population in Faqirbabad police station jurisdiction mainly consists of early migrants to Peshawar. The population is dominant by Urdu speaking people migrated from India and other Pakhtoon tribes including Afghan citizens.

The population in Town police station jurisdiction is heterogeneous and mainly consists of new affluent migrants to Peshawar with parts of Khalil pakhtoon population.

After collecting the FIRs from the police, it was necessary to refine the data. Not all FIRs were of criminal nature. It was needed to define what crimes shall fall under violent crimes and what shall be put under other umbrellas. All the crimes that involved a bodily harm were put under the heading ‘violent crimes’ (Holmes & Holmes, 2008). It involves murder or attempted murder, abduction, crimes involving gunshots, battery, assault, crimes involving injury, threats and intimidation, kidnapping, quarrels (fights), rape, robbery, sexual harassment, street fights, possession of unlicensed weapons.

Further, most of the crimes registered were Victimless Crimes, i.e. crimes that have no specified victim other than the society as a whole or the state. The second major crime category was crime against person or the violent crimes. Other categories include property crimes and public order crimes.

In category of violent crime, the following list is included:

There were 10 adultery cases in the study period. Mostly the incident of adultery/prostitution happen in urban areas of Faqirabad (4/10) and Gulbahar (3/10). No such incident was recorded in Mathra.

Conclusion and the way forward

This research was designed to analyze the existing trends in crime and violence in different localities of Peshawar district. The data looked into nature of offenses committed, i.e. whether offenses are committed in individuality or in groups? What was the mode of offense (if any), and what were the intentions behind crime commission?

This data is of immense utility for police and all those working on violence in Peshawar. The lessons learned through this project can then be generalized to other projects of the same nature in other localities in Pakistan.

The present data, if analysed on some visual mapping tools, may result in identification of hotspots of various crimes with accurate locations.

Muhammad Kamran is a PhD research scholar at the Department of Social Work, University of Peshawar, Pakistan. He can be reached at smkami2002@yahoo.com